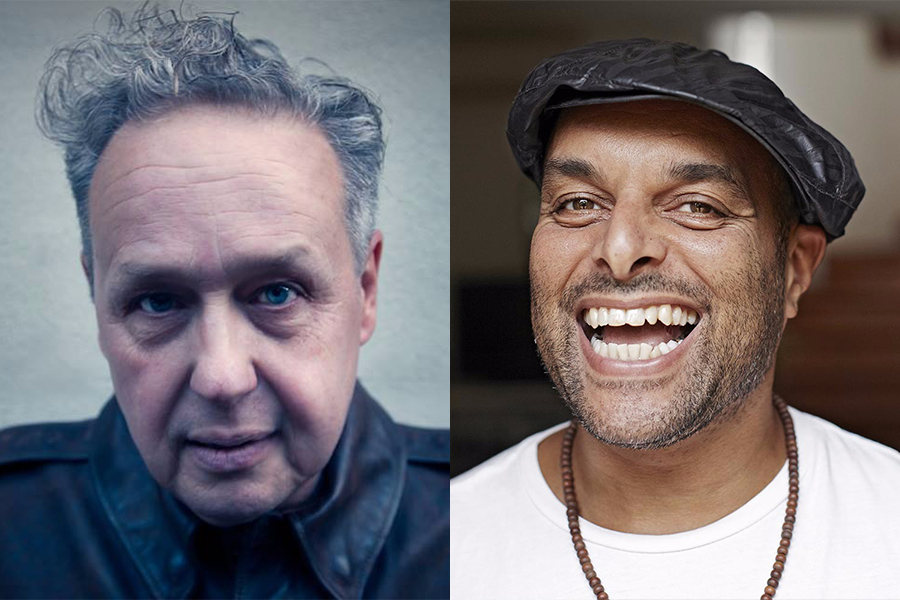 Surrounding the release of their new collaborative EP under their new SATE guise on London’s SoSure Music, Acid House aficionado Terry Farley and former M People drummer Shovell guide us through some of their favourite house tracks from the past and present day, accompanied by some incredible stories to guide us through their connection to each record. As expected we have some tales from the early Balearic days in Ibiza, London’s blossoming Acid House scene and classic Chicago vibes from Frankie Knuckles, all the way through to the more modern Acid doses from Paranoid London and Bontan.

Check SATE’s ‘Only When I’m Dancing’ on SoSure Music.

“LOVE THIS TRACK!! Classic inviting house piano intro, dropping into the deepest dirtiest of bass sounds, then into those percussive raw snare hand claps. LOVE IT!! This audible treat of wonder, is then topped off by the first sound of the vocals “I’ve been watching you for so very long…..”. Spoken as much as sung, warm but yet dark, the vocal sits on a bed of deep house, wrapped in a Latin sheet. The vocal introduces us to infidelity from a lover. A phone conversation mostly in Spanish dominates the middle of this track, and then we are slammed back into that piano riff. West Side Story meets House music at it’s best. Always brings the memories flooding back whenever I hear this momentous song. Dance floor filler, 89/90 memory inducer, classic deep house inspirer.”

“Right, honesty time. I first started writing about Promised Land by Joe Smooth and then changed my mind to “Someday” A very, very close run thing. More honesty – through necessity for happier, healthier and dare I say wiser reasons – I’ve been off the booze and recreational since February 2010. However, the memories and feelings of some magical moments spent on dance floors in the late 80’s and 90’s still exist, and it would be churlish of me not to be honest when reminiscing about some of these tracks, and their big impact on me.

Someday, has all the ingredients that mean definitive house music to me: a positive message, amazing vocals, great piano, and a killer bass-line. Being completely “loved up,” whilst dancing non-stop on a crowded dance floor. A dance floor that has bliss seeping through its very foundation. That foundation helping you realise your own incredible individuality, within this amazing throng. Then “Someday” drops……MASSIVE!! It’s a track, that for me, sums up completely what we were all doing on that dance floor in the first place. Unashamedly unifying, optimistic and deliciously heart warming. This track – along with “Promised Land” – manifests a feeling of that original, innocent, beautifully intentioned movement that shaped so many of our lives, then, now and in all the days that we have left. ANTHEM!!

“Someday” was a song that we covered in M People too. Playing this at Glastonbury 1994 in front of 60,000 people, the last bit of setting sun shining through as we reached the second chorus, the Glastonbury Tor in the distance, looking across the stage at Mike, Paul and Heather and the other eight musicians in the band, thinking about the parts of my life that had lead me to that unimaginable moment right there. A very emotional experience…1Family”

“I first visited and performed in Ibiza in 1990, where I was invited by and played alongside the renowned DJ Alfredo at Pacha. We first met in a club in London at the Holborn end of the Grays Inn Road. The night was called “Monkey Drum”.

“Monkey Drum” was a weekly Monday night club, so only for the head strong. I was meant to be in Ibiza for a week, five weeks later I returned to London, thinner, worldly wiser and full of Balearic zing. This track sums up the term “Balearic” for me, when used in a musical genre description, and brings those memories of my first introduction to Ibiza flooding back. It was one of the best, worst, exciting, scary, liberating, laughing, tearful times I’d experienced…Life changing for sure!

This track created in 1984, so certainly not made for the Acid House dance floor. Sung in Italian, delivered in a bouncy, percussive way, full of pulsating polyrhythms, trumpets, electric guitars, piano, and for me absolutely exudes a feeling of the warm Mediterranean sun, blue skies, big smiles, joy and freedom. A big tune for me and for many others back in the day.”

4. Timmy Thomas – Why Can’t We Live Together (BMI)

“End of the night, post a great party…this drops as the last tune. Full of outstanding sentiment. Float home on a wave of LOVE!

Created in 1973, for me, it’s another one of those classic Balearic tracks. It has only has two instruments in the whole track, a drum machine and a Hammond organ. Simple, beguiling and inspiring. Sadly, still absolutely relevant today, if not more so.”

“It’s 1989, I’m a plumber on Lewisham Council, had been since 1981. My Universe stretched as far as the next away game to watch ‘The Arsenal’.

In that same year, I find myself at SHOOM, Thrale Street, London SE1 London. It’s the most incredible, amazing experience I’d had in my life at that point. Beyond words, it literally changed my life. A few months later I resigned from the council with the intention of becoming a musician.

That Shoom experience, and tracks like ‘Your Love’ played a massive part in helping me make that decision. They helped reveal to me that life is so much bigger than I ever truly imagined up till then. I needed to experience more of the same, and follow my dream. From the very first moment the synth line drops, you’re captivated. Those delicious vocals cascading through your mind, elevating every cell of your body. Magnificently sexy, and proper one on one business.

I was very fortunate to be in Frankie’s company many times over the years that followed. Incredible to think of that life circle completing in that way. Even more incredible was Frankie’s genuine humility, kindness, friendship and talent. A beautiful spirit very much missed.”

“Seemingly out of nowhere five years ago came this dark ’n’ sparse groove with the vocals of a bone fide Chicago legend and a bubbling 303 that kick started a rush of new Acid tracks. London Acid House at the top of the game.”

“Probably THE happiest of acid tracks and certainly the most soulful. Mixed by Steve Silk Hurley it’s classic Ten City (and of course Marshall Jefferson was involved). Byron Stingley had never sounded better and the actual 303 line just lifts any floor married with the sampled ‘ Love, Love, Love ‘ – proper E record. One of those classics you hear to this day at places like Horse Meat Disco and Croatian boat parties.”

“Frankie Knuckles’ does a Balearic moment that has finished off a hundred acid house warehouse parties. For Chaka herself, you have to wait a long long time but it’s so worth it. The piano line, drums and bass are all going off to places King Tubby would have been proud to have visited and the percussion (courtesy of David Morales) is tight as Chelsea’s defence.”

“All time classic Chicago record that rocks any house floor from the coolest kids to the older stalwarts. In this unreleased instrumental from the original sessions a 303 bassline sits beautifully on the top of that Def Mix rhythm. How I’d love to hear the Robert Owens vocals over the 303 dub mix. Can anyone at Def Mix make this happen please?”

“Easily my favourite tune of 2017 and easily my biggest record in all my sets when playing out. The bassline is an absolute killer with a breakdown that sends the dancers into a frenzy and the spotters over to find out what it is.”